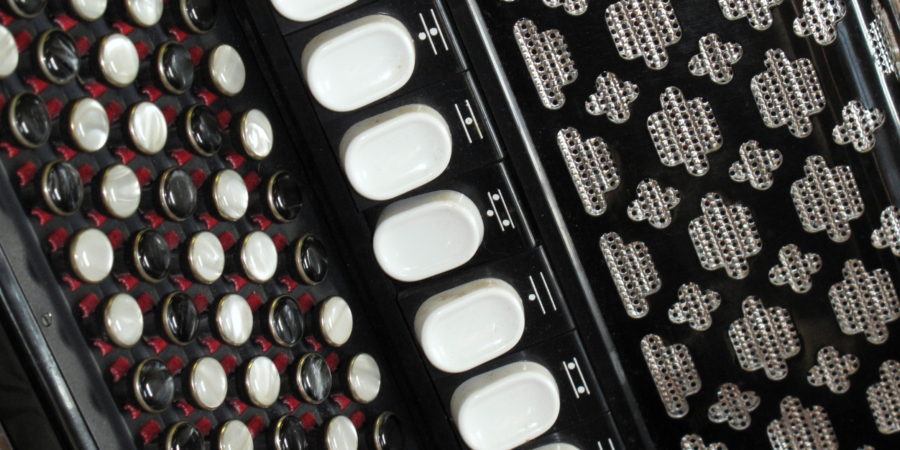 Damp and grey- not the best weather to be standing in a field in Bromham taking photos of sheep, and shepherd and business mentor, Chris Farnsworth. We talked about his work and the team-building and motivational course he runs. Are you a sheep, a sheep dog or a shepherd? You’ll have to read the next issue of Wiltshire Magazine to find out more.

Sad to say – no more photos as all the kittens have found homes. I have entered a couple of my best pictures in the annual Cats Protection Photographic Competition. Although I wasn’t short-listed last year, one of my photos featured on their calendar. Kittens from V&P Collins farm shop again. 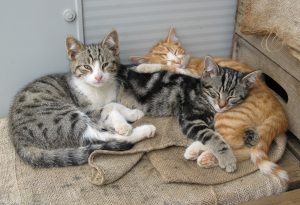 15 June How many kittens in a litter?

I’ve been keeping any eye on the latest litters of kittens at V&P Collins Farm shop, Bromham. Sad to say the mother of one litter died so the other mother, Missy, is looking after both litters. Twelve all together, I think. Difficult to be sure as they won’t keep still long enough to be counted. If they are still it’s because they’re asleep and are all huddled up together in one big heap and they all seem to merge together.

28 May Something for all folk …

It’s always fun to wander round Chippenham during the Folk Festival, this year celebrating its 40th anniversary over the Bank Holiday weekend. It began to drizzle as the opening parade started to walk down the High Street. Nothing really dampens the spirits of the folk aficionados, whether watching or taking part, as group Boggats Breakfast do each year.

Lots going on under cover in the marquees and in the Neeld Hall. I loved hearing JigJaw, four female singers (with a dash of clog dancing) and watching an American Dancing workshop. I wanted to join in but decided to stay watching on the sidelines. I couldn’t compete with all the complicated footwork and energetic arm swinging.

Pleased to meet Kathryn and Rob Hipkiss of Asbeau at their craft stall in the marquee in Monkton Park. 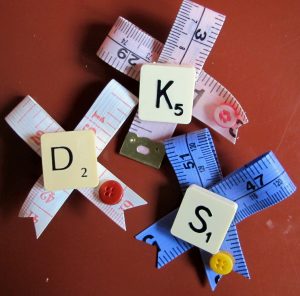 What a clever name for their quirky retro recycled junk goods made from Scrabble letters and Cluedo boards, vinyl records, cassettes, lego, tape measures, playing cards – to name a few. They are based in Devizes but travel to fairs and markets around the country. I wanted to buy everything but just bought a few brooches made from bits of tape measure and scrabble letters. Clever and fun to wear!

April A Crafty Lot in Bromham

Researching local small businesses fora Wiltshire Life article.  Keith Mahoney is a member of the Worshipful Guild of Blacksmiths and has his own forge in Bromham.

I have been spending a lot of time in Devizes recently for a feature on the town for Wiltshire Magazine. One of the hidden treasures I found – except not so hidden to members of the Devizes & District Miniature Rifle League and regular drinkers at the Lamb Inn which is Devizes’s oldest pub, dating back to 1450.

In the back room is an unusual (rare?) indoor shooting range (known as a tube and target) which runs behind the walls of the Ladies and Gents toilets. Ask landlady, Sally King, to show you and she will remove a large metal disc (like a manhole cover) on the wall to reveal the 25ft metal tube for shooting down at the target. I wouldn’t want to be taking a pee on competition night.

I had a browse round Joan Pressley Hats in St John’s Alley, just to get an idea of what to wear for the Royal Wedding. I was rather taken with these beautiful creations – silk headpieces, real works of art by London designer and milliner, Bridget Bailey-Tomlin. They may be more suited to the excesses and eccentricities of Ladies’ Day at Ascot but I do covet the peapod design and would love it as a corsage.

After wearing out a bit more shoe leather, I thought I deserved a sit down and something to eat. I went for soup and a croque monsieur at Mayenne (named after Devizes’s twin town) the new cafe bistro in Snuff Street. Very tasty gruyere in my Gallic toastie and delicious homemade spicy sweet potato soup.

February 2011 Pressing all the right buttons

I met Malcolm Stevenson at Market Lavington Old School Day Centre where he was entertaining members with his accordion music. He also talked about a variety of accordions and demonstrated their different sounds. The Dino Bafetti (see picture) is a Melodeon, most at home accompanying folk dancing. 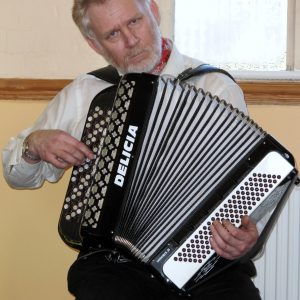 I particularly liked the Delicia Continental Chromatic Accordion, as well as the look of it with its lovely shiny buttons. See feature image.

I couldn’t get near Steeple Ashton near Trowbridge last week because Camilla, Duchess of Cornwall was visiting The Wiltshire Guild of Spinners, Weavers & Dyers who meet in the former St Mary’s School building. So I popped across when all the fuss had died down to have a look round. I thought they might be a good subject for my Wiltshire Magazine series Join the Club.

I was impressed with the facilities including studio space for weaving where a number of looms are set up. Once known as Staple Ashton, from the local wool trade and cloth production, it is fitting that the group has made its home in the village and is keeping these ancient crafts alive.

Everybody starts off a quiz night in a spirit of fun and friendship but as the evening goes on, so the excitement and competitiveness increases to fever pitch. And the New Year Literary Quiz hosted by Jo Batchelor and Chris Palmer of Devizes Books on 19 January 2011 was no exception.

My three friends and I arrived and joined the other teams seated at bistro style tables in the upstairs gallery where we were served wine and nibbles. We were surrounded by the latest exhibition of work by local artists and craftsmen which later provided a welcome distraction from wrestling with questions such as ‘What was Mr D’Arcy’s first name?’ and ‘On what book was the film Apocalypse Now based?’ *

We also had a picture round of authors to identify. We got stuck on JG Ballard which I said was Keith Waterhouse and also on JRR Tolkien which I said was Laurie Lee. No one had a better suggestion. Never mind you can’t win ‘em all – except we did, well, that is enough points to win! We had a great time and went away with a £40 book token to share. Thank you, Jo and Chris. It’s good to support your local independent bookshop in new enterprises and I hope there will more evenings like this.

Hurrah! my favourite vegetable this winter: red cabbage cooked with red onion and apple, a dash of cider vinegar and a spoonful of wholegrain mustard. Red cabbage is in short supply at the supermarkets at the moment so I moseyed on down to my local farm shop V&P Collins at Bromham and found these monster cabbages available (fortunately sold by the half). I have made a huge batch and am slowly working my way through it. I even had some for breakfast with a bit of bacon – better than All Bran, I can tell you. 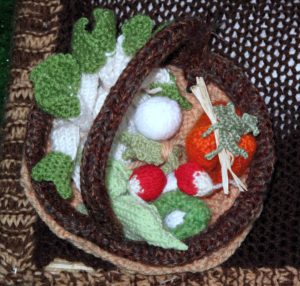 I don’t have a picture of the cabbages so you’ll have to be satisfied with the knitted salad selection from The Knitted House. (archive 23/07/10)

Stopped at my favourite place at Beckhampton early this morning hoping to glimpse the partial eclipse of the sun and take a few pictures. I was too afraid to look at the sun rising but managed a few shots of the lovely ochre sky as the sun peeped above the horizon over towards Silbury Hill. 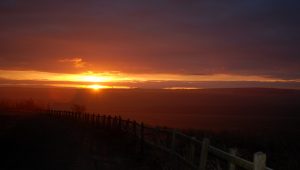