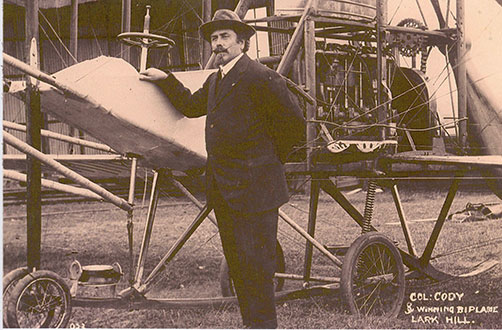 I picked up this postcard at an antiques fair because of the Wiltshire connection. The caption reads: Col: Cody & winning Biplane, Lark Hill.  I knew the name Cody from Buffalo Bill but was there a connection to the Wild West?

Samuel Franklin Cody (1861-1913) aka ‘the Colonel’ was a showman and aeronautical designer who was born in Iowa and liked to claim some connection to William ‘Buffalo Bill’ Cody.  His actual name was Cowdery. He left America in 1890 for England and then travelled round Europe performing as a cowboy in shows. He developed his act with his family into a full Wild West show, returning to England in 1898.

He became interested in kite-flying  and patented a man-carrying kite system in 1901, later selling four sets of kites to the Admiralty. In 1905 the army ordered kites and engaged Cody to instruct the Royal Engineers in their use. He stopped his theatrical shows to concentrate on developing airships and military aeroplanes. He designed and constructed an airship in which he made the first powered aeroplane flight in Great Britain on 16 October 1908.

In 1912, Cody visited Larkhill on Salisbury Plain to take part in the Military Aeroplane Competition winning the competition prize of £5000. Cody was able to sell his plane to the British government, where it acquired the code name ‘British Army Aeroplane No 1′. It was a biplane with a 40-foot wingspan and bicycle wheels on the wing tips.