Deep in the Tuscan countryside, the medieval hilltop village of Civitella had lived peacefully for centuries, until war ripped the community apart. The events of 29 June 1944, left 116 men and boys dead and three quarters of the houses destroyed or burned as reprisal for the shooting of three off-duty German soldiers in the dopolavoro – after work club. 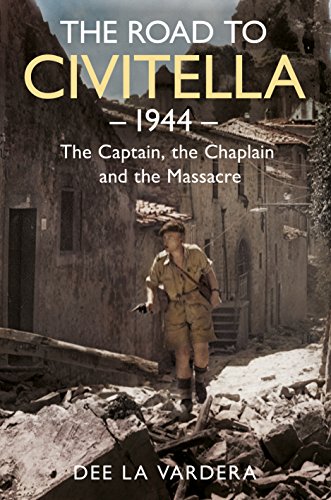 Dee’s book tells the story of two British officers who brought comfort and relief to the survivors of the 29 June 1944 massacre, and are still remembered today.

Review from the Catholic Herald (Francis Phillips), 17 November 2016  Amid the brutality of war, an act of kindness shines all the more brightly

The massacre and destruction of Civitella on 29 June, 1944 by the 1st Fallschirm Panzer Division ‘Hermann Göring’ as reprisal for the shooting of three German soldiers in the village Dopolavoro after work social club, left women widows and children fatherless.

The book describes the journey of Captain John Percival Morgan and Father Clement O’Shea with the Eighth Army in Italy, to that hilltop village in Tuscany. Even though they had seen much death and destruction during their service in North Africa and Italy, they were moved by the plight of this small community. The two British officers adopted the village, and over a five-month period, regularly brought life-saving supplies and comfort to the women and children.

The village organised a farewell Christmas party that survivors still remember today, treasuring gifts they received from their ‘Santa in a truck’. Thanks to Keith Morgan, Captain Morgan’s son, discovering Civitella in 1997, while retracing his father’s wartime journey, this part of Civitella’s history would have gone unrecorded and forgotten. In 2001, the village commemorated the work of this father and friends in the naming of a street Costa Capitano John Percival Morgan. A son found his father; a town its hero.

‘I am really excited that the book about my father John and his friend Father O’Shea is finally published.’ Keith Morgan.

‘I was thrilled and very touched to receive a gift from Keith of a 50th anniversary commemorative medallion of the massacre, as a reminder of our association and the writing of the book. Not that I need reminding as I have been living with The Road to Civitella 1944 for over three years!’ Dee La Vardera. 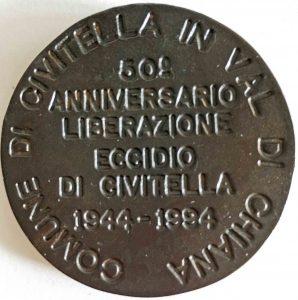 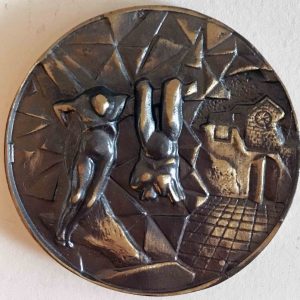 The Road to Civitella 1944: the Captain, the Chaplain and the Massacre (Fonthill Media): Dee La Vardera. Available on Amazon

I started the book in May 2013 and it is hard to believe that it is nearly two years since I last visited Civitella for the 70th anniversary of the 29 June 1944 massacres. I finished the book The Road to Civitella 1944: the Captain, the Chaplain and the Massacre, at the end of October 2015, which should be published by Fonthill Media in summer 2016.

It has been hard writing about the atrocities and the suffering of those living in this part of Tuscany during the Second World War, a place usually associated with sunshine, olive groves and bottles of chianti.

In 2014, the commune of Civitella remembered the massacres in Civitella, Cornia and San Pancrazio, and celebrated the two British officers who helped the survivors in the aftermath. The last few survivors still bear witness to these atrocities and meeting them at the 70th anniversary commemorations last June, was a moving and humbling experience. Remembrance and respect for il caduti – the fallen, always in their hearts – and now in mine.

There is something very special about the place; something which draws you back, in spite of the history of the village and surrounding area and the dreadful events during World War Two. It is a beautiful, tranquil place with lovely people who are kind and generous in their hospitality.

The 70th anniversary programme of commemorative events was organised by the commune. It was a busy weekend with a special mass, concert, torch-lit evening peace walk and memorial wreath laying by British and German Ambassadors and Italian and German Foreign Minsters of State.

The legacy of the Civitella massacre still lives on and the village today prides itself as a centre of peace and the arts as well as one that honours Caduti dell’eccidio – the fallen of the massacre. In the newly refurbished Sala della Memoria – Memory Room, the visitor is reminded of the terrible events seventy years ago and cannot help but be moved by the displays: remains of charred wallets found on the dead; the bloodstained dress of a girl who cradled her dying father; a drum and cymbal and dented brass band instruments from the village band – picked up from the debris of the bombed school hall and played by members of the Musik Korps – Music Corps (part of the Hermann Göring Panzer Division responsible for the massacre) while executions were taking place in the village square.

Keith Morgan, son of Captain John Percival Morgan (RASC) who features in my book The Road to Civitella, 1944: the Captain, the Chaplain and the Massacre, gave a speech at the thanksgiving service. The village honoured his father in 2001 by naming a street after him and dedicating it to Father O’Shea and members of the British Army who came to the aid of survivors in the aftermath of the massacre.