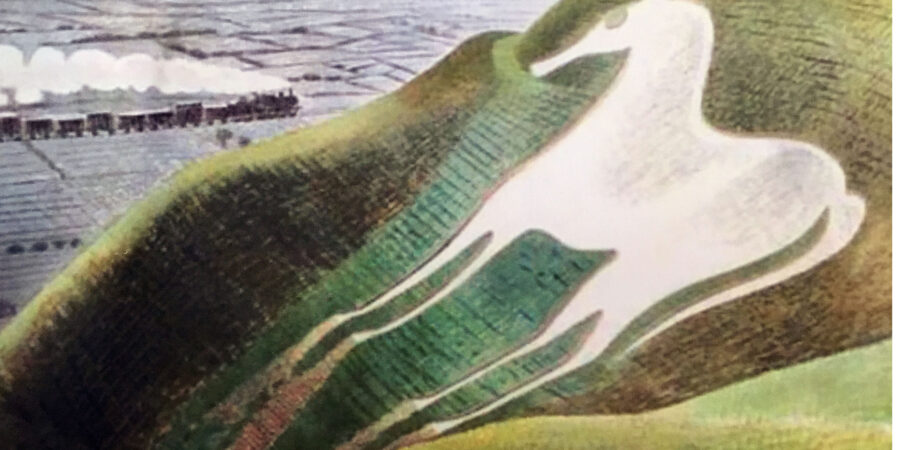 Eric Ravilious, 1903-1942, artist, designer, book illustrator, and one of the first official war artists appointed by the War Artists Advisory Committee (WAAC) in 1939.

This long-awaited exhibition –  postponed due to Covid,  will be a treat for fans of the artist, and a great introduction  to those who do not know Ravilious and the range of his work. 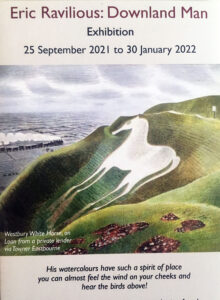 To me, Ravilious manages to combine gentleness and strength in his work, subtle tones and a lightness of touch. There is a pureness and clarity of the subject and form, which creates a powerful sense of the atmosphere of a place – whether Wiltshire downland, an empty operations room, a waterwheel, shop front, allotment or naval shipyard. His war pictures, are both records of what he saw and the experience of the moment captured for ever.  All the more poignant as he lost his life while accompanying an RAF air sea rescue off Iceland, aged thirty-nine.

It’s quite a feather in the cap for Wiltshire Museum Devizes to hold this exhibition, curated by James Russell, Ravilous expert, and author of numerous books in the series Ravilious in Pictures. The pictures chosen explore the artist’s fascination for the chalk downlands of Wiltshire and Sussex.

Where do the pictures come from?
For the very first time Wiltshire Museum will be borrowing over 20 artworks from major National Museums to bring an international standard art exhibition to the County. “The show will appeal to art lovers across the country and to local people who love the iconic local landscapes.  We  have secured a significant range of evocative watercolours for the display from Tate and V&A as well as private lenders. Other lenders include the Imperial War Museum, British Museum, National Museum of Wales and the prestigious Towner Art Gallery in Eastbourne.” 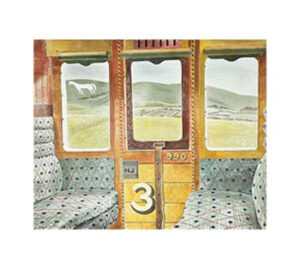 As you’ve probably guessed, I’m a great fan of Eric Ravilious. I find his work deeply moving.  I’ve mainly seen his work in books, reproduced on cards and calendars – some original ones in galleries – including  war paintings on show at the Imperial War Musuem. These are some of  his finest work. I also love his lithographs, and his wood engravings: sublime: bold and dramatic studies of birds and mammals, men and women at work in the countryside – a contrast to the more ethereal quality of his watercolour paintings.    (Image Train Landscape, Westbury Horse)

Back in 2012, I went to a lecture given by James Russell, which was part of Devizes Arts Festival.  The Museum had recently bought White Horses, a rare work by Ravilious, only recently discovered. They paid £6,000, thanks to donors and fund raising activities.  We heard the story behind the ‘lost’ dummy book which Ravilious had been preparing for Puffin at the time of his death. It was based on the text of the book ‘Downland Man’ by H J Massingham – a British writer on ruralism. The talk was accompanied by other Ravilous pictures with the stories behind them. He managed to achieve so much in his all too short life. I look forward to viewing the new exhibition will I’m sure will reveal more the man and his work.

More on the exhibition and how to book Wiltshire Museum Devizes