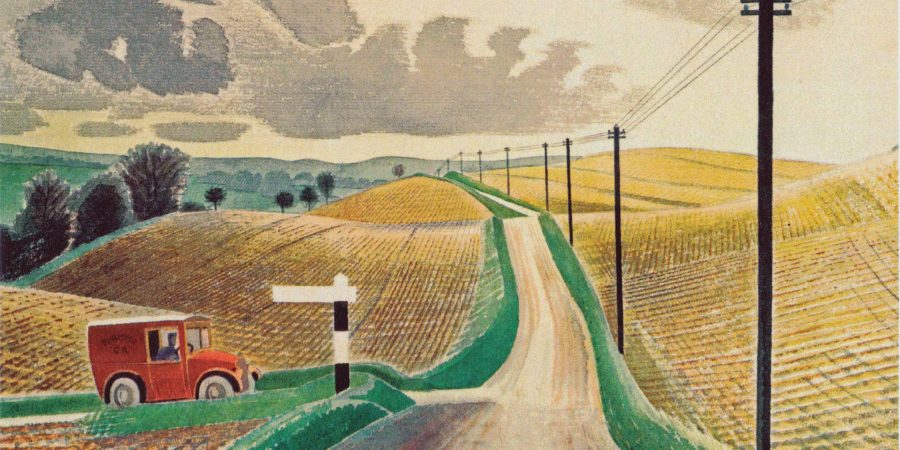 The sound of sonatas, tone poems and operatic arias filled the hall at Marden House, Calne last Saturday night, competing with the whizz and bang of fireworks across the town. Outside miserable and wet, inside warm and welcoming, as we enjoyed a joyous celebration of the composer Frederick Delius in this 150th anniversary year of his birth.

David Stone, conductor, violinist and Delius expert, who was the first to record all of the Delius violin and piano works, strolled onto the stage. A debonair gentleman in bow tie and velvet smoking jacket settled into an armchair with a glass wine and talked to the audience as if to an old friend, catching up on the latest news. His gentle and seemingly casual style of delivery was effective in conveying biographical facts, commentary on Delius and his musical abilities, interwoven with musical illustrations. There was no feeling of being lectured to although I learned a lot about the man and his path to success as composer. That he had spent time trying to grow oranges in Florida and that he owned Gaugin’s painting of a reclining nude, ‘Nevermore’ (voted Britain’s most romantic painting in 2010 and now in the Courtauld Gallery) bought from his friend in Paris for £25 in 1898 and hung in his music room for the rest of his life.

Thank you to the Friends of St Mary’s Church for putting on this event. It’s a privilege having the opportunity to hear knowledgeable and witty raconteurs such as David Stone who make their wet weary way out to our neck of the woods. Maybe people thought the subject too esoteric, or that it wasn’t quite their cup of tea. Probably Strictly Come Dancing or fireworks won out, but it deserved a larger audience.

One of my favourite films is Witness with Harrison Ford and Kelly McGillis, set in Pennsylvania and filmed in Lancaster County – Amish country, not far from Caln Township, Chester County which is twinned with my home town Calne, Wiltshire. So I was thrilled to join the 30th anniversary visit and be able to see first hand some of the places I remembered from the big screen. Suffice it say, I had a great time – plenty of material (when digested) to keep me going for quite awhile.

One event which was not on the usual tourist trail, was attendance at the open-air 9/11 memorial service at nearby Coatesville which is home to the Lukens steelworks where the steel trees which formed the bases of the twin towers at the Wolrd Trade Center were made. They had to be able to withstand incredible stress (which they did). Eleven were rescued from the site and returned to the town; two were on display and served as a poignant reminder of the dreadful events of that day in 2001.
Jim Thompson, NY Fire Officer, describes what happened to him while on duty on 11 September 2001

Not a Write Off

A few days later I was off to London (jet-lag and all) to a Guardian Masterclass: Learn the Art of Screenwriting. I’ve written odds and ends of scripts over the years (mainly for radio and attempts at Doctors and TV sitcoms) but this course really inspired me to tackle the idea I have had brewing for a number of years. The tutors were fantastic and I was particularly impressed by Shawn Slovo (A World Apart, and Captain Corelli’s Mandolin, for which she apologised as she said it was an impossible book to adapt and she hated the film!); and Olivia Hetreed (The Girl with a Pearl Earring) who dealt with openings and how to grab the viewer’s attention.

When I got home I decided to watch Witness, a film so striking in its time (1985) that the Amish subject alone made it memorable. What was the opening like? When did the key plot element, the murder of the undercover cop in the gents at Philadelphia train station take place? 14 minutes into the film, if you’re interested? It was the music (Maurice Jarre), the lingering camera shots of the landscape and slow unfolding of the story – not the words, there were very few, that totally gripped. Now that really made me think like a screenwriter.

June 2012 Eric Ravilious and the White Horses of Wiltshire

I have long been a fan of artist, Eric Ravilious, and the Wiltshire Heritage Museum lecture on 28 June by James Russell, as part of the Devizes Festival, was, therefore, a really exciting occasion. I heard that the Museum had recently bought a rare work by Ravilious, only recently discovered, and we would be hearing more about it.

James Russell, author of four books in the series Ravilious in Pictures spoke to a packed house, and the appreciative response from the audience illustrated the strength of feeling there is for this artist, and in particular the pictures with local connections. There is nothing finer than the subtle tones of his watercolour landscapes and the atmospheric representations of the many aspects war on land, under water and in the air. Ever the adventurer and seeker after truth, his war art is all the more poignant as he lost his life while accompanying an RAF air sea rescue off the coast of Iceland aged thirty-nine.

James Russell revealed the story behind the discovery of the lost ‘dummy’ book which Ravilious had been preparing for Puffin at the time of his death. Read more 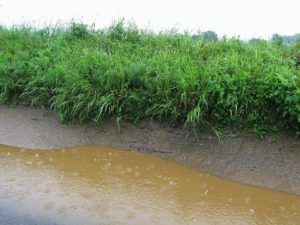 Lucky for actor Graham Seed, that ‘falling’ of the roof of Lower Loxley didn’t bring him the same fate as his character Nigel Pargeter suffered: the end of his working life. Graham has not been out of work since his dramatic exit from The Archers back in January 2011. Most recently he has been touring the UK as Jim Hacker in the West End production of Yes, Minister, and is now able to add a performance of another kind to his CV – An evening with actor Graham Seed and author Mavis Cheek at the Wiltshire and Swindon History Centre on 17 June 2012.

This event was part of the Love Reading, Love Libraries initiative by Wiltshire Council Libraries Service, and took the format of two old friends in conversation about their professions and their friendship. Mavis Cheek who lives in Wiltshire is well known for novels such as Amenable Women, about Henry VIII’s fourth wife Anne of Cleves, and Mrs Fytton’s Country Life and Janice Gently Gets Sexy. She was as much at ease with the audience as the more experienced performer, Graham, batting questions back and forth like a Wimbledon Champion, encouraging Graham in talking about his acting career and personal life, as well as linking them back to her own experiences as a writer. Both were consummate performers and obviously enjoyed the evening as much as we did, happy to answer all sorts of questions from members of the audience – not all Archers addicts.

I enjoyed hearing about what influenced Graham to become an actor. Watching Michael Redgrave in Dead of Night, a chilling tale about the dummy which takes over the mind of the ventriloquist was one, as well as seeing people like Olivier and Ralph Richardson on stage. Mavis, too, had acting ambitions after playing the lead in Julius Caesar at her girls’ Sec Mod but took a different path, joining a London art gallery and finding herself rubbing shoulders with artists such as Hockney, Caulfield and Bridget Riley. She started writing when her daughter was young and has steadily built up a writing career over the years. If you want to learn how Graham and Mavis met read the Independent article

Thank you, Wiltshire Council Libraries Service, for bringing a bit of West End glamour and showbiz chat to a wet and windy Sunday evening. I look forward to more events like this around the county, and I hope that the opening of the new Trowbridge Library in September will be an excuse for more literary get-togethers like this.

To Marlborough to see The Merchant’s House where costumed guides and re-enactors brought the 1653 home of Thomas Bayly to life. I couldn’t coax a smile out of the Puritan gentleman (quite right too, he stayed in role) but I apologised for asking to take an image of him with my devilish apparatus. The house is still a work-in-progress but there are enough restored and furnished rooms to give a real sense of what it must have been like living in a house of a wealthy silk merchant which had been rebuilt after the Great Fire of Marlborough in 1653.

The property was last occupied by WH Smiths (1926-1990) and luckily had not been modernised to any great extent so uncovering the hidden delights was less problematic than in some restoration projects. Marlborough Town Council bought the property in 1991 and leased it to the Merchant’s House Trust for a yearly rent of £1 and a bag of peppercorns.

This is a fine example of joinery from the Charles II period on the staircase. The turned balusters reflected in a painted design on the stairwell walls only came to light in 1991. 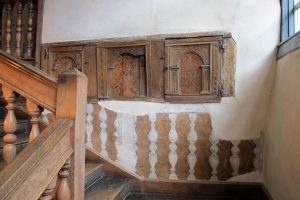 My first visit to Avebury Manor since its restoration and refurbishment. The TV series To the Manor Reborn with Paul Martin and Penelope Keith had whetted my appetite for the real thing and I wasn’t disappointed. My favourite room was the one which you enter first, Keiller’s Parlour, set pre-war in 1939. You felt as though Keiller had just left the room and would come back any minute and sit at his desk to make notes about his latest work on raising the stones.

Or would relax in one of the cosy armchairs, feet up on foot stool, casting an appreciative eye over the motor car design on the carpet – not one of his beloved Sizaire-Berwick, I don’t think. You can see the real car displayed in the museum next to the house.

I was very pleased to meet Robert Goddard, ‘master of the clever twist’, and author of 23 thrillers who visited Marlborough to promote his latest book Fault Line. I have only recently discovered his books, thanks to a friend who recommended them. I was looking for books with Wiltshire settings, so immediately polished off Sight Unseen (Avebury), the three Harry Barnett books: Into the Blue, Out of the Sun and Never Go Back (Swindon) and Caught in the Light (Lacock). I’m hooked!

After an entertaining hour of Robert’s talk about how he became a writer, with many hilarious anecdotes about mishaps along the way, he asked for questions and fielded ones about ebooks and the future of real books, as well as which book was his favourite – the one he has just finished. He then signed books and chatted to his fans. I queued up and asked for a photo to accompany my column in the next issue of the SWWJ magazine, The Woman Writer.