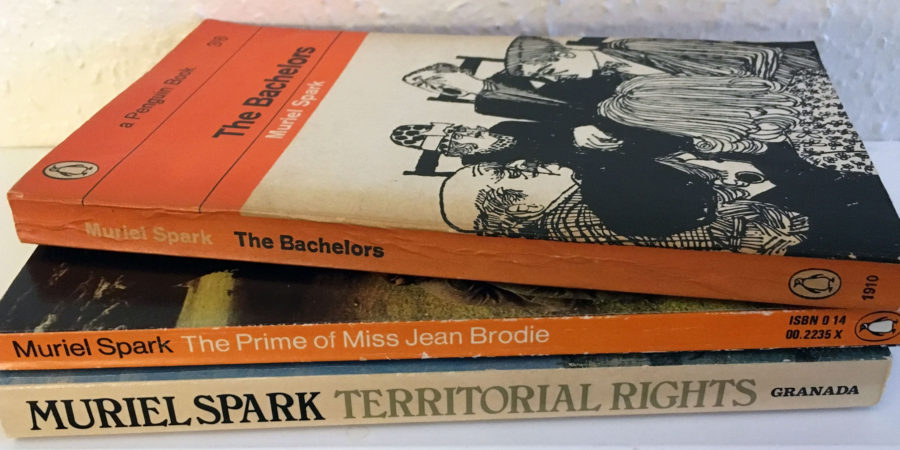 Fascinated to learn that writer and poet Dame Muriel Spark, best known for novels such as Memento Mori (1959), The Prime of Miss Jean Brodie (1961) and The Girls of Slender Means (1961) lived for the last thirty years of her life  in San Giovanni di Oliveto, a converted presbytery near Civitella di Chiana.  Spark was made an Honorary Citizen of Civitella in 2005 and died a year later in hospital in Florence 13 April 2006. She was buried at St Andrea of the Apostle Church, Oliveto.

When I visited Civitella in October 2103 to interview people and research the events of June 1944 for my book, The Road to Civitella 1944: the Captain, the Chaplain and the Massacre, I was not aware of Spark’s links to the area and the village itself. I did not find any signs or references to her, or her legacy as a writer, so was unable to pay my respects to her, even though she had many friends and was well known locally.  She used to shop in Civitella – presumably at the Marsili’s shop in Piazza Mazzini, the only food store in the village, which I have visited.  Nothing in the guide book or in the sala della memoria (Remembrance Room) which features life before and after the massacres. 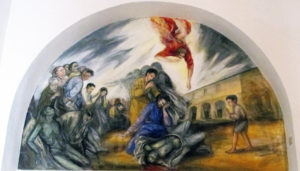 A memorial mural of the massacre in the Church of Santa Maria Assunta, Civitella

In a tribute to Spark in The Scotsman, 24 April 2006, after her death, a neighbour Alva Salviette recalls, ‘When she first moved in to the house, you would often see her at the shop in the village, talking to everybody. She told me once that she got ideas for characters in her books from locals.’

The Mayor Massimiliano Dindalini, who awarded the Honorary Citizenship to Spark, recalls (in The Scotsman article) how Spark was a part of the community, ‘She really got into the lifestyle and I remember her telling me how she would pick the olives in her garden every year with the locals and then send them off to be crushed into oil.’

Don Gualtiero Mazzesci,, the parish priest, and close friend of Spark, also reported, ‘Muriel always told me how she found the solitude of where she lived very striking. But don’t get me wrong, Muriel wasn’t a recluse, she had plenty of friends and the local people adored her. ‘

April 2016 will be the tenth anniversary of Spark’s death and February 2018 will the 100th anniversary of her birth. Perhaps a plaque, a street name, a mention in a tourist leaflet would be appropriate.  It strikes me that it would  interest (and attract) visitors, and offer another perspective of the author in Italy who was also part of the community in this beautiful tranquil place. A place which transformed itself after the war, having come to terms with its tragic past – the death and destruction from the massacres in the region during the latter part of the Second World War.

I shall try and visit the grave in Oliveto when I am in Civitella in June 2014 for the 70th anniversary of the Massacre. I’d like to see  if I can find out more about the time spent there with her friend sculptor Penelope Jardine. She was obviously influenced by living in Italy and it seems like a good time to revisit her work and read some of her essays and articles, as well as the later books written during her Tuscan years which include:
The Driver’s Seat (1970), Not to Disturb (1971), The Hothouse by the East River (1973), The Abbess of Crewe (1974) and The Takeover (1976).

I hope to find out if she was still in her prime as a novelist while writing under the Tuscan sun.