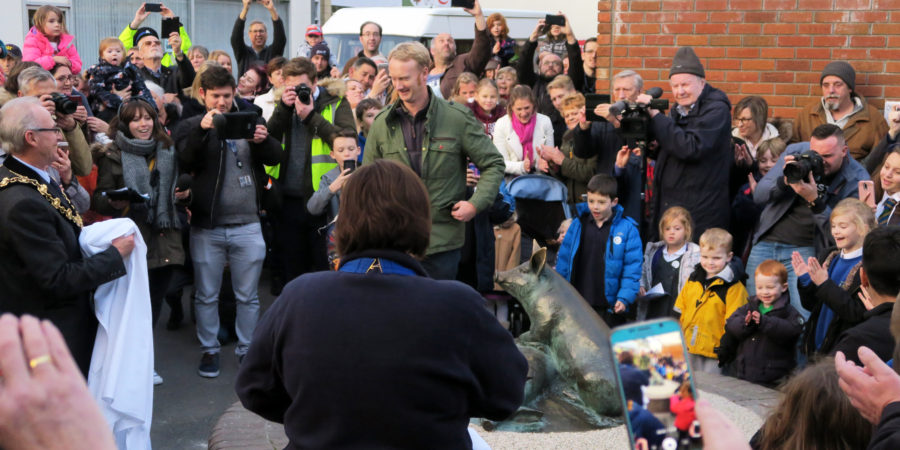 Hundrerds of people gathered in Phelps Parade to watch the unveiling by Mayor Cllr Tony Trotman and see the pigs emerge from under a white sheet. The pigs were lost to view as children rushed forward to clamber all over them – as though they had been starved of their compnay for a long time (only a month from theft to recovery to re-installation). 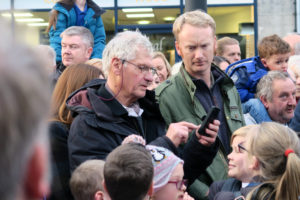 Sculptor Richard Cowdy (left) who inspected the pigs for damage after their recovery, chats to Andrew Blackford (right) from Blackford Engineering who undertook the repair work. Richard made the original pigs. He remembers how they were first received in 1979.’ As we cemented it in place, a crowd, mostly hostile, surrounded us. People were shouting ‘Rubbish’ and ‘The money should go to the NHS.’  They didn’t realise that the sculpture had been paid for by Calne Civic Society, and the work had only cost £148 to cover the metal’.

How things have changed in forty years!

Thanks to Calne Lions Club for their support in paying for the recent repairs and fitting. Nice and secure now against any further attacks or nefarious activities.