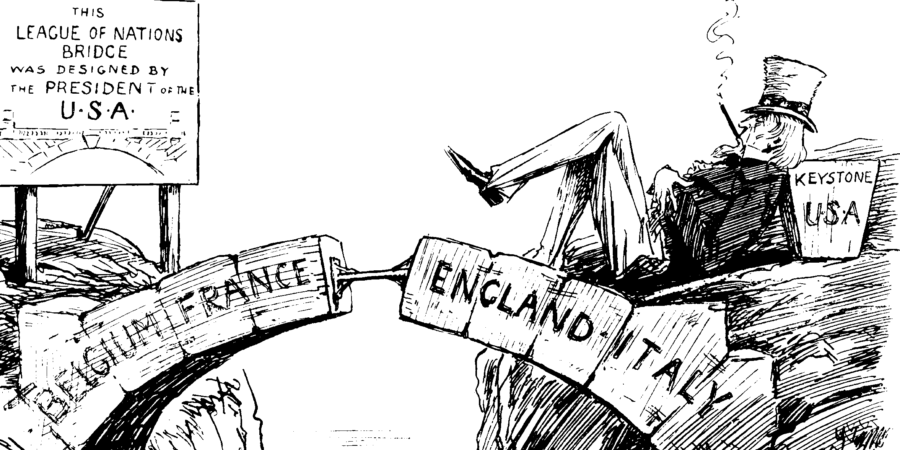 ‘The world must be made safe for democracy. Its peace must be planted upon the tested foundations of political liberty. We have no selfish ends to serve. We desire no conquest, no dominion. We seek no indemnities for ourselves, no material compensation for the sacrifices we shall freely make.’
Woodrow Wilson, on the State of War with Germany during an Address to Congress. April 2, 1917.

A few years’ ago, while I was researching for The Little Book of Wiltshire, I came across Leonard Raven-Hill (1867-1942), Punch cartoonist and illustrator of Kipling’s Stalky & Co who lived in Bromham near Devizes (1896-1912). He also designed First World War propaganda posters. He came to my mind again at the opening of a new exhibition in Devizes.

‘The Winds and Words of War’, an exhibition of First World War propaganda posters from the San Antonio Public Library Collection, Texas, is on a two-year European tour. Fresh from its four-month stopover at the Médiathèque Jean Falala Library, Reims, France, it is now at the Wiltshire Museum, Devizes, until 22 April 2018. This is the only UK venue so it’s quite a coup for the museum, and for the county.

There are forty lithographic posters from a collection of over 600 – re-discovered in the vault of the Texana Collection of the San Antonio Public Library, and not on public display since 1933. Subjects range from recruitment drives to the military, appeals for books to send to ‘our men in camp and “over there”‘, for women to ‘Preserve’ food on the home front, and the nation to buy Liberty Bonds.

Vibrant colours and impassioned words make these posters powerful works of art, as well as records of social and political history at this critical time when US President Woodrow Wilson took his country to war in April 1917. 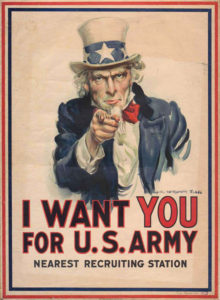 As I walk into the gallery, I am greeted by the beautiful ‘Wake Up, America!’  by James Montgomery Flagg, and on the opposite wall, his famous poster ‘I WANT YOU FOR THE U.S. ARMY’ – his representation of Uncle Sam (based on the artist himself). Flagg ‘borrowed’ the idea from Alfred Leete (also a Punch man) whose front cover for London Opinion, 5 September 1914 became iconic: ‘BRITONS – picture of Lord Kitchener pointing his finger – Wants YOU. JOIN YOUR COUNTRY’S ARMY. God Save the King.’

It’s interesting to look at Raven-Hill’s approach to the subject, such as Recruiting-Sergeant Punch with cap raised in ‘To Arms’ – “Now, my lads, your country wants you. Who’s for the Front?” The sailor on deck looking out over stormy waters in ‘The Watchers of the Seas’ – ‘The Navy needs boys and men from 15 to 40 years of age.” And, in particular, Raven-Hill’s interpretation of Uncle Sam. Compare his version in the 1919 cartoon ‘The Gap in the Bridge’ (feature image). Now who influenced whom?