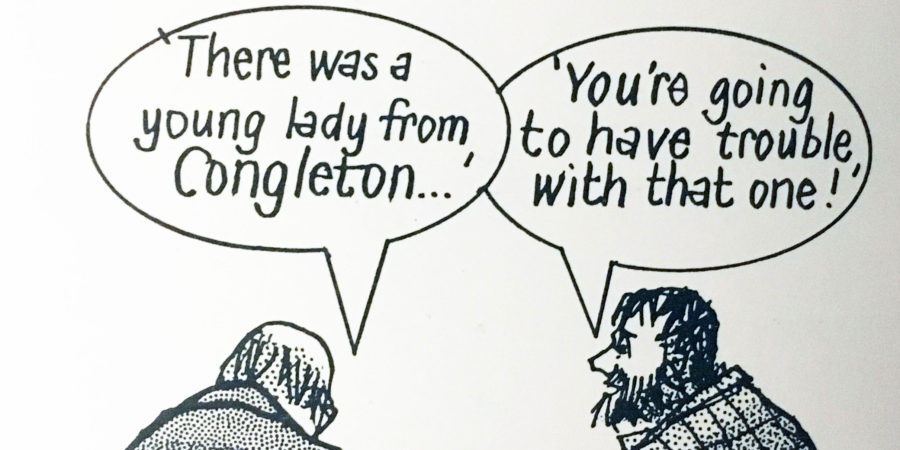 I’ve been writing the odd limerick for ages, mostly to include in people’s birthday, leaving or retirement cards.  I think the personal touch is appreciated and recipients usually laugh when they read them;  and I don’t think it’s just being polite. However, I’m not sure  how wise it is to be planning a whole book of limericks. Does anyone read them?

When I say planning, I’ve actually been working on them since before Christmas and have completed my target of 25 plus a story told in limericks (another 16 verses).

My father Warren Richards wrote many poems  in his life time, including limericks. He self-published a small volume donkeys years ago – with illustrations by his son-in-law, David Barlow, an artist and lecturer.  (See featured image) I had thought of republishing them but then decided to do my own book. It’s provisionally called Cats, Dogs and Poker Players – Limericks for All –  including Bringing Home the Bacon – the story of the theft of Wiltshire’s Bronze Pigs.

However, I’m thinking that it might be better to publish the Calne Bronze Pig story separately as it stands alone. We’ll see.

I have tried to avoid reading other poeple’s limericks so as not to be influenced or to end up suffering from LED – Limerick Envy Disorder. I am ploughing my own limerick furrow. As they are going to be illustrated by a local artist and illustrator, they do need a strong visual quality.

1
A retired opera singer from Sark
Kept a blackbird, chaffinch and lark.
She taught them a teeny
Bit of Puccini,
With a thrush that flew in from the park.

I have a couple  which may be a challenge but we’ll see if they work.

2
Iambic pentameter is fun
If you get all the scansion in one.
But be heavy-handed
And I’ll be quite candid,
You’ll wish that you’d never begun.

3
Young Kierkegaard struggled to find
What made up the unconscious mind.
He knew HE existed
But always resisted
Applying that thought to mankind.

How easy will they be to illustrate?

Having said that I wasn’t going to read other people’s limericks, I have looked up a few for this blog and these are two  which I liked:

There was a Young Lady whose chin
Resembled the point of a pin:
So she had it made sharp,
And purchased a harp,
And played several tunes with her chin.

Few thought he was even a starter;
There were many who thought themselves smarter,
But he ended a PM
CH and OM
An earl and a Knight of the Garter.

Yes, I definitely now have a touch of LED