I was  very pleased to read about the recognition that the volunteers of WILSAR, Wiltshire Search and Rescue, received last month from Kier Pritchard, Chief Constable, Wiltshire Police. Seventeen volunteers from Wiltshire Search and Rescue were sent personalised letters from the Chief Constable in recognition of their dedication and commitment to the organisation. The volunteers were thanked for the hundreds of hours of service they put in, their important roles in saving the lives of missing people and of their continued hard work in supporting the police when they are called out.

In 2017 the team attended 41 incidents and were directly responsible for saving the lives of five people. If they had not been found in time, and the emergency medical care given by the trained team, they would have died.

In 2010, I wrote an article about WILSAR for Wiltshire Magazine. As part of my research, I joined volunteers on one of their exercises.

A Decade of Duty 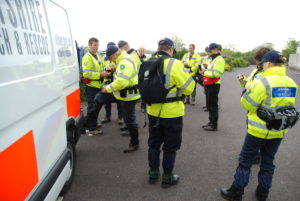 It’s a cold, damp, early Sunday morning somewhere in Wiltshire. The actual location isn’t important. It could be farmland down Salisbury way, an industrial estate near Malmesbury, or along the Kennet and Avon canal in Pewsey Vale. We know where we are but there’s someone out there who doesn’t.

I am on exercise with WILSAR, Wiltshire Lowland Search and Rescue, which celebrates its 10th anniversary this year. One of the largest in the country, the 50 or so volunteer members aim to help the Police and any search organisation, look for missing and vulnerable persons. They also assist neighbouring counties and need to be ready to respond to call-outs at any time.

We have been summoned by text message to the location. Steve is Search Controller today at ‘HQ’ which is the back of their Search Control Vehicle. Thanks to years of fund-raising they managed to reach the £25,000 needed to buy and equip the Renault Trafic and trailer.

It is equipped with a variety of kit to deal with land and water rescues – from kayaks to plastic bags for evidence gathering, as well as providing the mini office/command centre necessary for organising searches. A refreshment tent is also erected to fuel searchers working outside in unfamiliar territory. A search lasts on average four to six hours.

As information is received about the misper (missing person), Janice, trainee Search Controller today, organises the volunteers into three-man/woman teams. Having sorted out who is leader, navigator and scribe, everyone is briefed on the current status and profile of the misper. It might be a child or an adult who has wandered off, commonly someone with dementia. Or what is known as a despondent, someone suffering from depression, a possible suicide.

The search is planned according to statistics taken from Lost Person Behaviour by Robert J Koester on patterns of behaviour, distance travelled and length of time missing. The teams start with a quick search of the 300m from the LKP or last known point. As more information is received and the teams report back, the area of search expands, taking into account reflectors or attractions to the missing person: a former home or workplace, a family grave, perhaps.

As WILSAR moves into its second decade, sadly it is a reality of society today that the need for its services will not diminish. As long as people go missing, whether intentionally or through no fault of their own, Search and Rescue volunteers will drop what they are doing, leave their comfortable, bright office or safe, warm homes, to go out and search for those lost in what seems to them to be a frightening and insecure world.