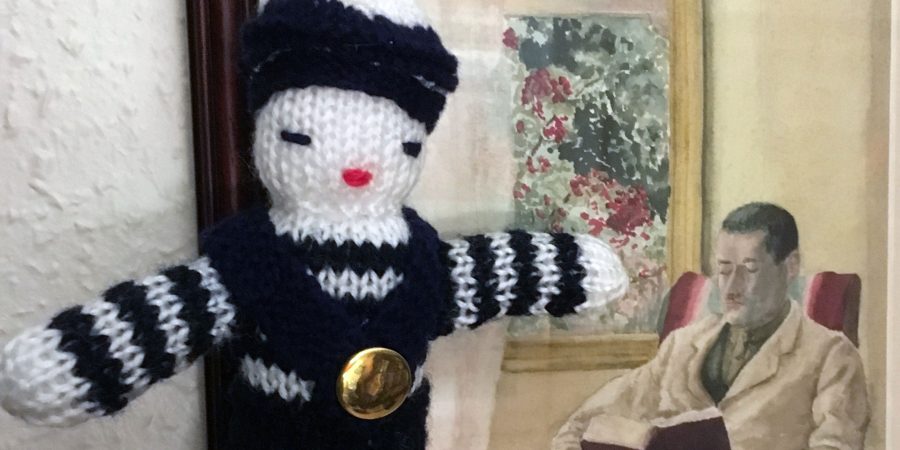 Not a Rolex watch,  a Caribbean cruise or tickets for Bruce Springsteen. Or a spa weekend, dinner for two at The Ivy or a box at The Royal Opera House. I’m a simple gal. My favourite Christmas present this year was a crocheted Breton sailor (I think that’s what he is meant to be) made by my French friend Bernadette who lives in Brittany.

I have him hanging in the hall over a watercolour picture of my father. They just seem to go together. New buddies.

I look at them both as I walk up and down the hall on my way to and from whatever domestic business I am carrying out – so that’s a lot of footfall. And it makes me smile as  I remember my father in later life, often in an armchair, always with a book. A young man of nineteen reading; an old man of ninety-one still reading. 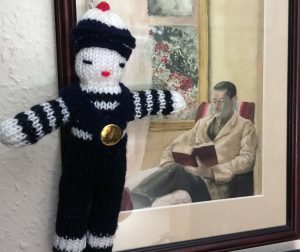 The watercolour painting is interesting,  part of my family history. In addition, it has a reminder of my late brother-in-law David Barlow, an artist and lecturer in art in Birmingham. He reframed the picture many years’ ago, and wrote, in his beautiful italic hand, the description on the back. 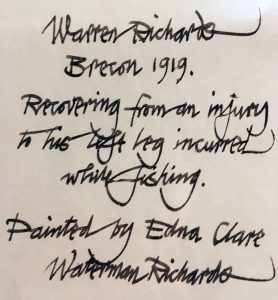 My Aunt Edna was artistic and studied under Laura Knight but gave it all up to become an Anglican nun. I only met her a few times at the convent where she lived. I was scared of the nuns in black habit and starched white winged head dress (what I think is called a cornette). In those days, the sisters wore the full monty.

My father studied analytical chemistry at Bristol just after the First World War, and worked for a short time at The Mond Nickel Company, Clydach. He also got religion, and joined an Anglican order at Mirfield with the Community of the Resurrection.

He left the life of a monk due to ill health and went to theological college, was ordained and became a curate in Wales.  Then quite a while later, after he married, he gave it all up when he converted to Catholicism, thus losing his livelihood. This was all history by the time I came along – third daughter. I never even knew that my father had been a vicar until I was well into my teens.

My father eventually found work as a bookeeper, having tried to find work  in his field of expertise. On retirement in his sixties, he became a science teacher. There was a shortage in those days, and he carried on until he was seventy. The pupils loved his lessons with the bangs, flashes and smells of lab experiments.

I suppose what I’m saying is that you travel many different paths during your life. There will be quiet country lanes and busy motorways, roundabouts and junctions, and crossroads to navigate on your journeys. You will meet some dead ends, take wrong turnings and have to turn round and try again; or follow diversion signs and land up some destination you hadn’t plan. And the unexpected journey may prove to be the most worthwhile and fulfilling in the end.