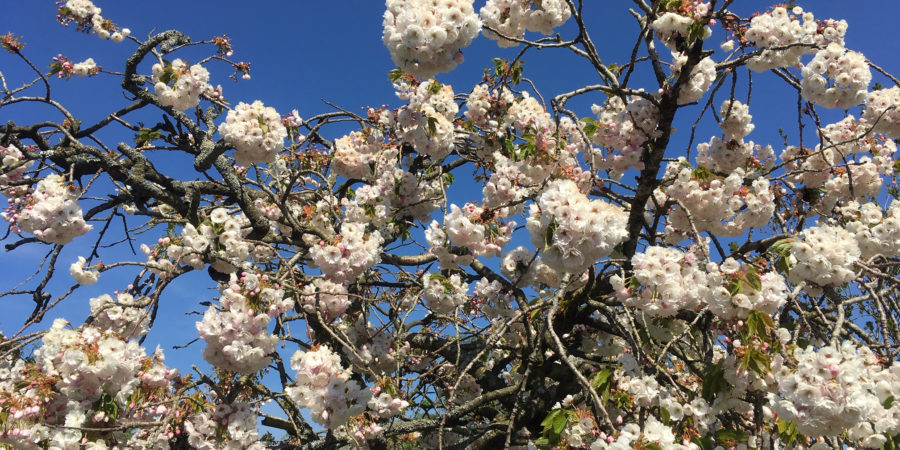 Before the wind swept a lot of it away into pink and white confetti heaps beneath my feet, tree blossom has been a welcome sight on my daily walk around my estate. The birdsong has been glorious too, as the usual sounds have dissipated: screaming children in nearby school playground, distant hum of traffic on the A4 and Air Ambulance helicopter overhead, searching for a green space on which to land. 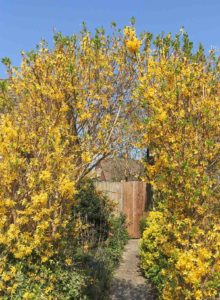 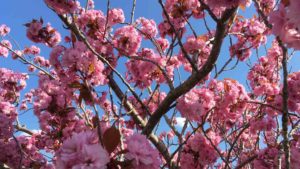 For weeks I have been listening to a very persistent and unusual bird call – from early morning and on and off through the day. I cannot see the bird or place it exactly but have managed to identify its call thanks to the RSPB website. I have a Great Tit (or two) which sings to its distant mate – I assume, as the call is returned from far-off trees. A delightful to-ing and fro-ing of the bird conversation with its distinct sound of ‘Tea-cher, tea-cher’ – just like a child trying to get attention in class.

I have finished reading The Mirror and the Light and reached the end – the last ten or so pages, with a beating heart and fearful as to how Cromwell would be executed – quick and efficient like Anne Boleyn’s was with the French executioner; or a bloody massacre like many others previously described in Bring Up the Bodies. I was sad that the players – Henry VIII, his wives, the clerics, the Howards and Seymours et al and ‘dear’ Cremuel had left the stage for good.

I have been enriched by Mantel’s books: emotionally and intellectually, having experienced such a diversity of characters who, in the main, still exist today in various guises. I have learned a great deal about Tudor times and seen parallels with today’s society – not least, references to the plague and Henry’s trying to avoid visiting certain parts of the country to protect himself; and Cromwell’s falling ill and in his absence from court how his reputation and future fall from grace emerges with the lies and plotting already set out out by his enemies. Internal politics; the State of the Nation – nothing changes. The ebb and flow of Henry’s (the country’s) relationship with Europe – messengers, ambassadors, courtiers, traders, spies (fake news and plenty of brown envelopes or rather leather pouches of sovereigns and prercious stones) back and forth between countries.  Everyone, much troubled, power-hungry and fearful of each other’s behaviour and intentions.

I cannot praise enough Hilary Mantel’s final book of the trilogy. Apart from the incredible depth of research undertaken by the author to present this credible world, she  has created a style and form all her own: a coherent multi-viewpoint narrative. We are inside Cromwell’s head as well as outside looking in, combined with numerous voices of many other characters; and the presence of Mantel, narrator and observer of the whole ghastly pageant and pantomime of power at the Tudor court.

It doesn’t matter that you know the ending of the book before you start reading – it’s how and when his betrayal happens and how quickly he falls from grace that drives the narrative. It’s tense and gripping, funny, dark and sad. Others have written very eloquently about The Mirror and the Light – so I leave it to reviewers such as  Stephanie Merritt to do it justice.

Mantel should we awarded the Nobel Prize in Literature for her amazing trilogy and her body of work.  I would nominate her myself if I could. I looked up the criteria for nominations but sadly do not fit any category.

Come on, all you eligible dons, professors and  bigwigs in high literary positions, nominate Hilary Mantel. Do it NOW. 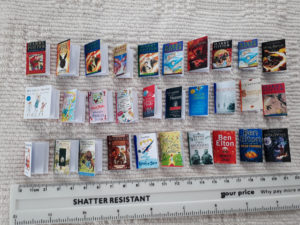 And still on the subject of books, I received a picture of a friend’s craft work. So creative under lockdown. My friend is refurbishing a doll’s house for her granddaughter and has produced some tiny books to add to shelves in a room. I am gobsmacked by the daintiness and attention to detail. I don’t know how someone can reduce the image of a book cover so small to print and still keep the clarity.

A good way to make books part of everyday life for a child – even in an imaginary home for dolls.