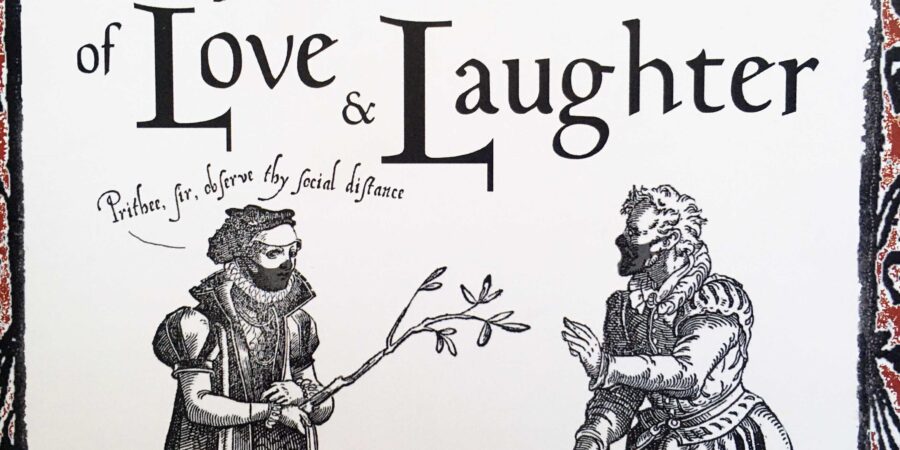 The ladies and gentlemen of Shakespeare Live present, for your delight in these uncertain times, diverse scenes of Love & Laughter, performed on the terrace of Cleeve House, near Seend. 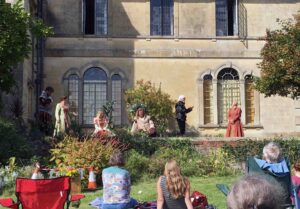 My first outing to the theatre, or any cultural event, for nearly a year. I didn’t get to the INK Drama Festival in April in Suffolk or see Mark Rylance in Semmelweis at Bristol Old Vic in July, or hear John Suchet talk about Beethoven at the Bath Festival in March. So, to have the opportunity to attend some open-air drama on my doorstep was not to be missed.

Everything was very well oragnised at Cleeve House with spots marked on the lawn for groups to sit and enjoy their picnics and watch the show.  Unable  to perform their planned summer production A Winter’s Tale,  the company put together a progamme of six scenes from a variety of Shakespeare plays instead.  It included rarely performed The Noble Kinsmen (attributed to Shakespeare and John Fletcher) and familiar plays such as As You Like It, Twelfth Night, The Merchant of Venice, Much Ado and Henry IV  Pt 2.

The comic scenes were the most successful ones.  Actor, Laurence Parnell, excelled as  Sir John Falstaff and Sir Toby Belch (in different plays, obviously) playing the roles, channelling his inner Boris in voice and manner.  We watched Falsaff’s desperate attempts to wriggle out of paying his debts, and of keeping his promise to marry Mistress Quickly; generally puffing himself up, stuttering and blustering, and wheedling his way out of it all.

A lovely Sunday afternoon. The sun shone. The sandwiches did not go soggy, nor the chocolate bar melt. The sound of birdsong, a distant rumble of cars, and lilting lines of iambic pentameter filled the air.