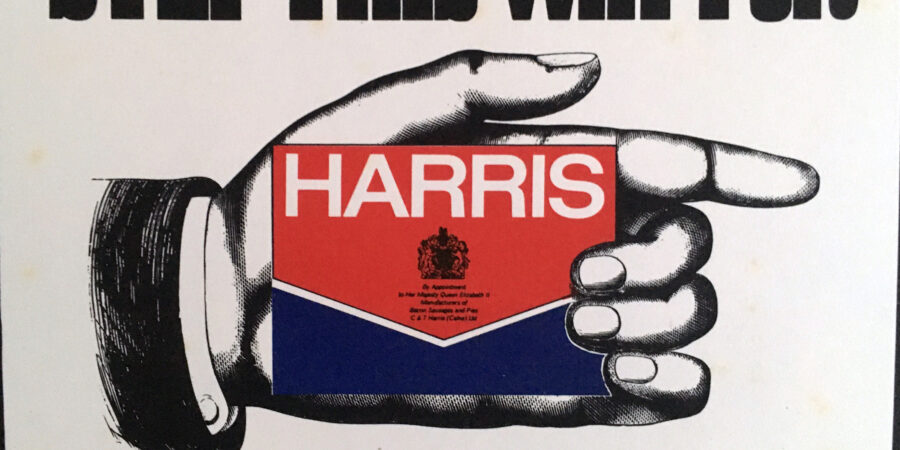 What a pleasure to find a rare early Harris-related document to add to the jigsaw of its history, tucked away among a load of a papers in a plain folder in Calne Heritage Centre.

It’s only A5 size,  printed and hand written in a beautiful script, dated 1866, and it’s either vellum, which was made from calf skins or parchment which is made from any animal skin – pigs, perhaps? 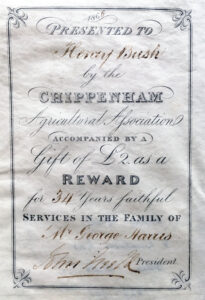 The name and address of the recipient of this certificate was written on the back: Henry Bush, 8 Lansdowne Row, Calne (1829-1905).

It is signed by the President of the Chippenham Agricultural Association,  Sir John Neeld,  MP for Chippenham, 1865-68.  The gift of £2 is equivalent to £240 in today’s money.

I was able to find out more thanks to the British Newspaper Archive (BNA), an essential resource for any historian. I found this news item which confirms the ‘provenance’ –  as they say on the Antiques Roadshow.

The Chippenham Agricultural Association was established in 1835, under the patronage of the Duke of Beaufort, and the presidency of the Borough, patron, Joseph Neeld, Esq.

I hope to find out more about Henry Bush and what he did for Mr George Harris during those thirty-four years of ‘faithful services’. I need to get hold of a census for that time and check the address and occupants, and their occupations. No room for all this in my book about C. & T. Harris (Calne) Ltd, sadly, just a short caption for the image. It’s good to know more about a document like this, that has survived intact for 154 years. How has it survived?