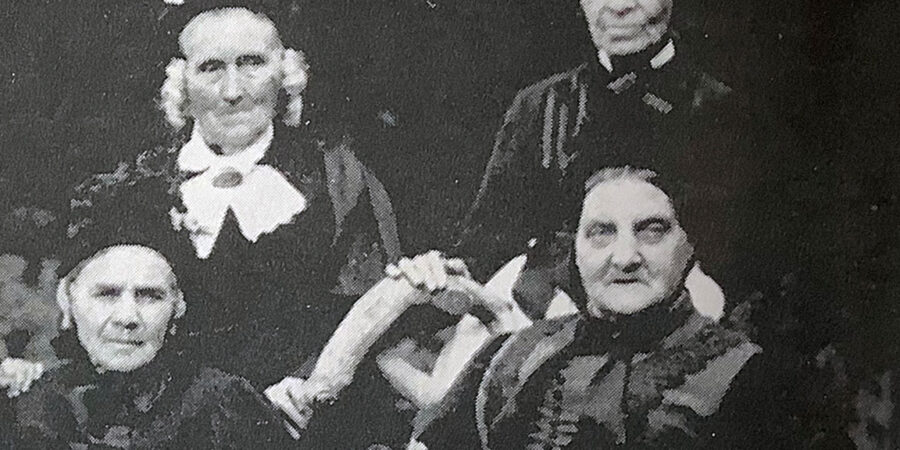 I have been obsessed with this picture ever since I came across it while researching my history of C. & T. Harris book. It was taken in 1900 by the Rev Robert Wheeler, who was minister of Calne Free Church for fifty years, and lived at No 1 The Green, opposite the Almshouses where the eight widows lived.

Who are they? How did they become widows? What was it like living there? 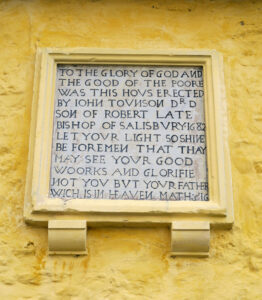 I decided to find out more about the history of the Almshouses, still in business since 1682 when it was founded by Dr Tounson of Bremhill. Three women and a man currently live there, the eight houses converted to four years ago. According to the census of 1841, there were twelve widows who lived in the eight separate houses. They are all described as ‘paupers’. That must have been a challenging time. I’ve seen inside the almshouses, and even converted, they are what you’d call ‘a bijou residence’.

Research I have done so far:
1. I’ve visited St Martin’s Church, Bremhill to see Dr Tounson’s memorial stone in the nave near the altar.
2.Wiltshire Building Records (WBR) sent me what they have – very little, sad to say. I was hoping there might be some early drawings or building plans. Disappointed.
3. I have a copy of ‘Endowed Charities of the Parish of Calne, John Ladd, 1859’ which details the charitable status of Tounson’s – thanks to Tim Havenith for sending me a pdf download.
4. Found out quite a bit about the Rev. Robert Gidley Wheeler’s work as a minister  from the British Newspaper Archives (BNA) and family details from the census and burial records.
5. The widows. I have the names of residents from the 1841 to 1911 censuses, and also some family history of some of them. I’m interested in creating a profle of each of the 1901 widows.

Some interesting little discoveries so far:

Rev Wheeler witnessed the ‘signatures’ of two of the widows in the 1911 census, who were probably illiterate and therefore put an X in the box instead of their signatures. His care for the widows was supported by this newspaper report from a tribute to Wheeler on his death,  September 1932. ‘The Rev. R., G. Wheeler would be greatly missed, especially by the old almshouse women and the sick and suffering.’

He was a keen photographer – thank goodness for men like him who recorded everyday life and people in Calne. Cameras were not common in those days – you needed a bit of money to pursue that interest. A picture is worth a thousand words,’ so they say.
I found this in a local paper which illustrated his skill and knowledge, in that field.
‘Literary Institute.—On Tuesday last the Rev. R. G. Wheeler gave a most interesting and instructive lecture in the Town Hall on New Zealand, illustrated by means of dissolving views. Mr. Wheeler’s lantern is one of the most modern, fitted with all recent improvements, so that the photographs ware reproduced on sheet with unusual brilliancy.’ 21 November 1889.

Until I’ve done more research and found out as much as I can about all these areas of interest, I cannot say what the final product will be. I have a pamphlet for the Heritage Centre in my mind, maybe a book and even a historical fiction novel (I have some ideas for that already). As lockdown eases, I hope to be able to visit places and meet people who can help me with my research.

There are a lot of well-known Calne family names in the census lists of former almshouse widows. I hope that those who identify relatives – perhaps through their own family history research, will contact me so I can add it to my story of the Almshouses.

I will publish the names of other widows from 1841- 1911 in another blog. And more of Wheeler’s pictures.