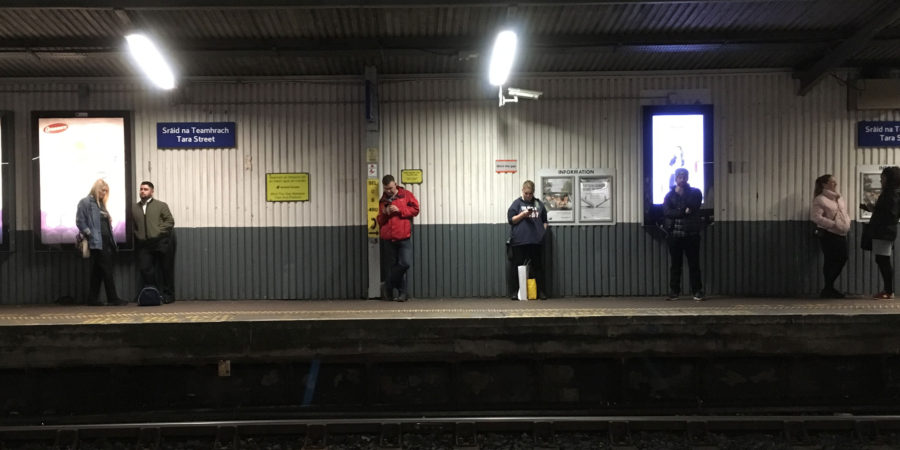 Waiting for a train after a night out in Dublin with friends, I feel as though I am part of  an Edward Hopper painting, reminding me of ‘Nighthawks’. Instead of a diner with its three nightime customers, it’s a long gloomy platform, the darkness interrupted by illuminated signs, and the shadowy figures of lovers and loners bound up in their own little worlds. A peaceful end to a noisy, jolly evening in a city centre pub overlooking the River Liffey.

The twinkling lights on O’Connell Bridge  and along the riverside are the backcloth to our window seats and table full of Guinness and local craft beer, as the amplified music of a guitar and fiddle duo saturates every corner of the establishment. We huddle closer as the players ratchet up the volume and customers get more animated.  It’s hard trying to maintain a conversation. Vegemite versus Marmite. The best fish and chips in Dublin. What will happen in the second series of The Handmaid’s Tale? All interspersed with the wit and wisdom of Oscar Wilde from the book I bought from Trinity College bookshop.

‘I have the simplest tastes. I am always satisfied with the best’
‘Some cause happiness wherever they go; others whenever they go’
‘Bigamy is having one wife too many. Monogamy is the same’

The place is packed from floor to ceiling now, every nook and cranny filled, everyone struggling to be heard above the noise. I’m getting hoarse. The musicians stop for a break and my voice soars above the sudden silence: ‘We are all in the gutter but some of us are looking at the stars’.

It’s good craic; it’s Friday night after all. Students and salary men and women are free, released from their workday bondage. Pints of beer and plates of Irish stew keep arriving, the contents hoovered up, and empties cleared away for yet more. But it’s the talking that really matters. Words, words, words. Banter and jokes, gossip and stories, arguments and opinions. All those words bottled up during the week, now pouring out to fill eager ears. And always a solitary soul wedded to his screen – doing his talking by text.