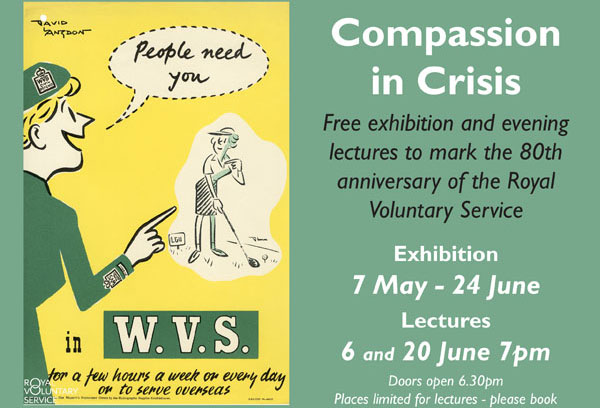 ‘The ultimate strength of a nation lies not in her trading, nor in the multitude of her trading transactions. It’s not found in her banking operations nor in the acumen of her leaders. The ultimate strength of a nation lies in the character of the men and women who are the nation, and voluntary service is an integral part of that character.’   Lady Stella Reading, Founder, WVS

I’m not that familair with the work of the RVS although I’m very grateful for their work in hospitals. I’ve had refreshments from their tea trolleys and bought items from their shops – fortunately only when visiting friends and relatives. I know that they deliver meals on wheels and run lunch clubs for older people but not much else. Thanks to the current exhibition at Wiltshire Museum Devizes, ‘Compassion in Crisis: 80 years of the Royal Voluntary Service’, I have learned so much more about the organisation. I am full of admiration for the heroines of the past (when it was the WRVS) and the current heroes of the RVS (which dropped ‘Women’ from their name in 2013).

Surprisingly, there has not been a public exhibition about their history since 1959 when they  celebrated their 21st Anniversary.

This modest exhibition in the Oexmann Gallery manages to pack in a lot of material with its attractive and informative display boards, and video wall display running archive footage. It even squeezes in a cabinet of uniforms to show the style changes over the decades. It was a real eye-opener to the variety of roles volunteers have played over the 80 years, and the extent of their work in this country and around the world.

I learned that the foundations of the organisation began in 1938, when Sir Samuel Hoare, Home Secretary, gave Lady Stella Reading permission to start The Women’s Voluntary Services for Air-raid Precautions.

I learned that in 1947 the organisation started the WVS Prison Welfare Scheme helping women in Holloway Prison with domestic problems; in 1956 helped Hungarian refugees after the revolution; and in 1999 WRVS provided rest centres and refreshments for the first Kosovan refugees.

On a lighter note, I learned that in 1948, WVS volunteers were entrusted with dusting the royal wedding presents at St James’s Palace; in 1980 they introduced ‘Granny Holidays’ for the elderly; and in 1986, eight volunteers helped for three weeks to sort the Queen’s 60th birthday cards at Buckingham Palace.

I did not know about the sacrifice of volunteers: that 245 WVS volunteers lost their lives during the Second World War.

The exhibition shows what an illustrious, forward-thinking and far-reaching organisation the RVS was – and still is.

‘Compassion in Crisis’ was officially opened on 16 May by RVS Ambassador, Dame Patricia Routledge. After visiting the exhibition, she went round to talk to people and was interested to know if they were volunteers (yes, many were with the musuem). She praised the work of volunteers in her speech and re-iterated the words of the founder:

‘Too many people think of volunteers as a means to an end, as cheap labour. True voluntary service is nothing of the kind. It is, in fact, the gift of a thoughtful person of their skill, their energy and their time.’

Dame Patricia Routledge also hoped that the RVS Archives would find a suitable home of its own, somewhere like the Wiltshire Museum Devizes.

The Chief Executive, Catherine Johnstone CBE, also attended and spoke about the current work of the RVS and where she saw their work in the future – particularly in relation to the NHS. The RVS Archivist, Matthew McMurray, who created the exhibition, spoke about the nature and importance of the archive, which is based in premises in Devizes, only open to the public by appointment.

It was fascinating to learn how significant the RVS archive is – the sheer size and importance of the records of women’s lives over the past 80 years. Matthew McMurray said, ‘Our collection has grown from a small nucleus of material to one of the largest and most culturally important charity archives in the country. To give you an idea of scale, all the boxes stacked on top of each other would be taller than Canary Wharf.’

‘In 2010 the WVS and WRVS narrative reports, which form a significant part of the Royal Voluntary Service Archive & Heritage Collection, were awarded UK Memory of the world status by the United Nations educational, cultural and scientific organisation UNESCO and are considered to be of outstanding importance and value to the UK.’