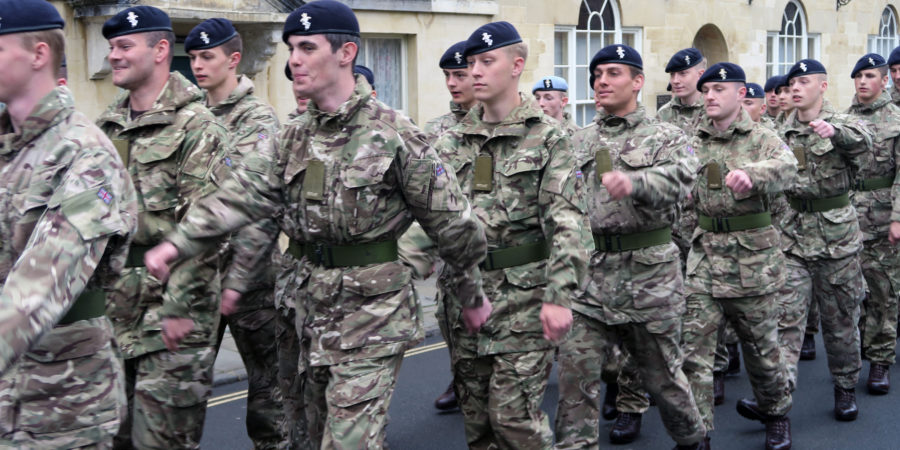 11am 26 May 2018, The Parish Church of St Mary the Virgin, Calne
Re-dedication of the restored War Memorial

They went with songs to the battle, they were young,
Straight of limb, true of eye, steady and aglow.
They were staunch to the end against odds uncounted,
They fell with their faces to the foe.
From ‘For the Fallen’ by Laurence BInyon

Most people were prepared for a bit of rain on Saturday morning – overcast sky, humid in spite of the sun hidden behind clouds but the weather held off for the special occasion. People gathered early in the town to get a good place to see the Parade make its way from The Strand up Church Street to the corner of Kingsbury Street, and then to stand along the road, facing the Church for the service of re-dedication of the War Memorial in St Mary’s churchyard. 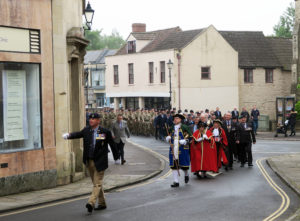 The event was organised by Calne Royal British Legion with Calne Town Council and St Mary’s Church. The Parade was led by RBL Parade Marshal, Des Turner, who was followed by the Town Crier, Mike Wylie, the Mayor Cllr Glenis Ansell and town councillors, with members of various organisations including Calne Air Training Corps, Police Cadets, the Scouts and Brownies, the WI, and a contingent of the Corps of Royal Electrical and Mechanical Engineers (REME) based at Lyneham (see feature image). 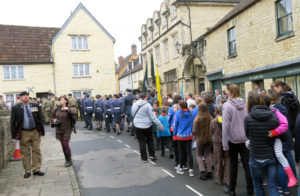 The Marquis of Lansdowne, who lost a great great uncle in the First World War and two cousins in the Second, attended the open-air service held by Rev Bob Kenway. Hymns ‘O God, our help in ages past’ and ‘Abide with me’ were sung by the church choir and the congregation  – guests seated under the shelter of trees in the churchyard, and those gathered in the street.

Lord Lansdowne unveiled the Memorial by removing the union flag, which was draped over it. Then for the Act of Remembrance, the 133 names of the Fallen of the First World War and  the 46 from the Second, were read out by a number of young people representing the organisations taking part in the Parade.  Paul Mayo, Chairman of the Calne Branch of the Royal British Legion read the poem ‘For the Fallen’. There was The Commitment to Peace, The Blessing and National Anthem, followed by the laying of laurel wreaths by Paul Mayo and The Mayor, Cllr Glenis Ansell.

A number of people from around the country had travelled especially to pay respects to relatives who had died in the First and Second World War. After finding the names on the memorial and taking pictures they were able to talk to Church Warden Deirdre Aldhous. She carried a folder, which contained information about all the people inscribed on the Memorial. This is kept in the church for anyone to read.

It was good that the community came together to support this important event and to see the preservation of a much overlooked and undervalued part of Calne’s history.

Thanks go to Calne RBL member Rod Rhodes for his particular contribution to the work. In 2014, he started to research the history of the War Memorial after Chairman Paul Mayo asked him to tbe involved in the plans to restore the Memorial.  Discussions were already in progress by members of the Town Council and RBL.  Member Paul Ellis took on  the fundraising side and over £10,000 was raised from collecting boxes he placed around the town. Rod also worked with the contractors for the War Memorials Trust.

It’s interesting to read the information Rod has gathered from local sources – some examples:

The final cost today was in the region of £25,000. There was a lot of additional work in restoring the churchyard path, cleaning the Memorial, and replacing part of the steps with Portland stone to match the original.

Generations to come will be able to visit the Memorial and read the names, and think about those who laid down their lives so that others might be free.

At the going down of the sun and in the morning
We will remember them.