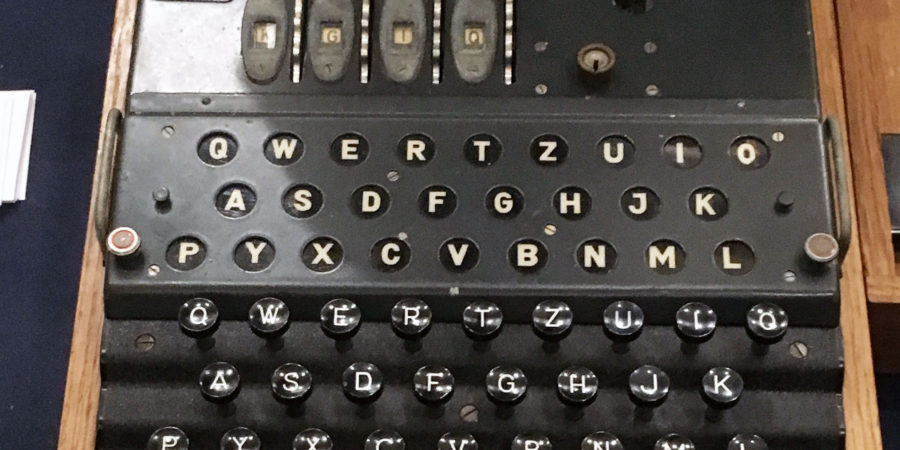 Two things I’ve learned this week: how an Enigma machine works and what happened to nuns after the Dissolution of the Monasteries by Henry VIII.

Now there’s nothing much to link these two, except they were the subjects of two events at Devizes Arts Festival this week. You, too, may have picked up knowledge about the 4-rotor cipher machines and seen one of the few surviving Enigma machines close-up or heard about the life of Agnes Peppin, the fictional nun in Victoria Glendinning’s latest historical novel The Butcher’s Daughter set in 1535.

On Tuesday 5 June at Devizes Town Hall, Dr Mark Baldwin, aka Dr Enigma, gave an excellent illustrated presentation about the history and development of the Enigma machines and the part they played in helping to win the war. He particularly focussed on the Battle of the Atlantic and how intercepting Intelligence messages, and cracking the code at one key time during the war, saved lives and many ships and their vital cargo. 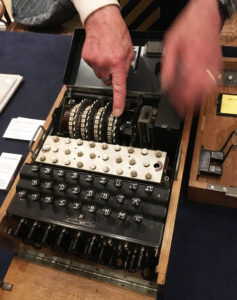 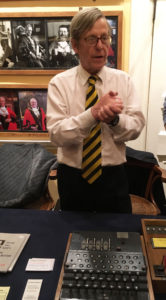 During the two-hour talk, which kept everyone spellbound, Dr Baldwin also gave a brief history of Bletchley Park and the work of Alan Turing- and with heads spinning with all the science and technology, we went out to have a close look at one of the real Enigma machines in action.

On Wednesday 6 June at The Bear Hotel Ballroom, award-winning biographer and novelist, Victoria Glendinning, was promoting her latest book The Butcher’s Daughter.  It is set in Bruton and Shaftesbury during the Tudor period, leading up to and after the Dissolution of the Monasteries by Henry VIII. It was fascinating to hear how she  stumbled across a sentence one day, while researching something entirely different: ‘What happened to all the nuns after the Dissolution was that they were cast adrift.’ 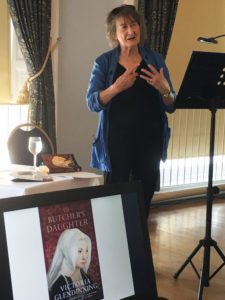 It set her thinking and she wondered why no one had written about this subject. What happened to the abbots and monks is pretty well recorded – they did rather well some of them, but most of the nuns just slipped into anonymity and often treated pretty appallingly.

Glendinning has done a  lot of research – real detective work from the sounds of it, and discovered some fascinating stories about some of the women who lost their homes and living when their convents or abbeys were closed or destroyed. Whilst her heroine is fictional, she says that Agnes Peppin embodies a lot of what many former nuns experienced. There seem to be a number of topical and relevant themes in the book: the empowerment of women in a male-dominated society, hearing the voice of the ordinary women, and role of the Church and the Monarchy in society.

On holiday next week and I hope to write about Lucinda Dickens Hawksley and her wonderfully entertaining talk about ’The Extended Dickens Family: art, acting, travel, lies and scandal’. She is the great, great, great granddaughter of Charles Dickens and knows a thing or two about her own family and the many, many relatives.