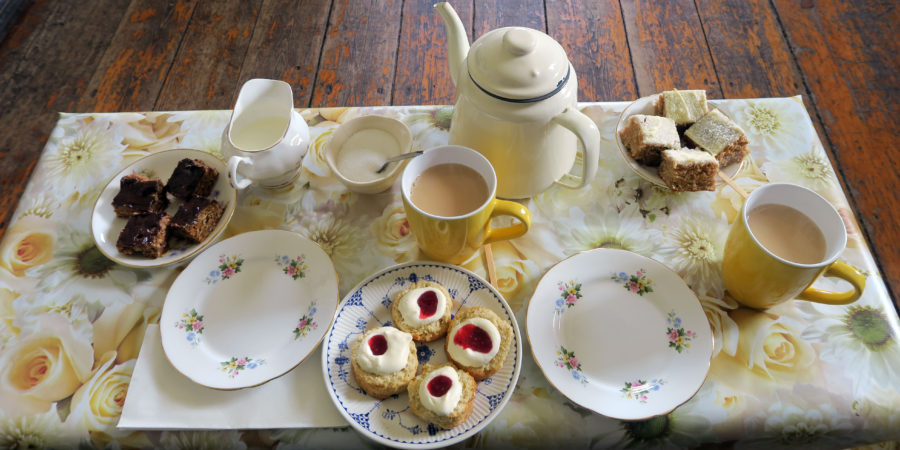 I suppose you could say that Glanquin House deep in the countryside of County Clare, Ireland fulfils that requirement: a handsome Georgian house, a remote location with vistas of distant hills and outcrops of rocks set in the middle of the wild Burren region, is one such place – especially if you are a Father Ted fan as I am.

It seems fitting that I have sat and had tea in the front room of Craggy Island Parochial House where scenes from Father Ted were shot in this 20th anniversary year of the death of actor Dermot Morgan who played Father Ted. He died on 28 February 1998 aged 45 after suffering a heart attack, one day after finishing filming the final episode of Father Ted. I toast the man and the series, with my cup of earl grey. 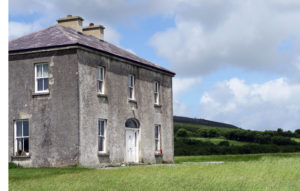 Although it is a studio-based sitcom – filmed before a live audience on sets designed to represent the rooms in the Glanquin House, other key scenes were filmed inside the house, notably those that required a window to fall through or needed the view to be seen outside. The  front of the house, of course, featured in the opening shot.

Our Mrs Doyle for the afternoon was Cheryl Mc Cormack who, with her husband Patrick, owns the house and farm. Not only did she serve us a delicious tea,  she told us how their house and the area around had been chosen as the location for Craggy Island – its appeal being its bleakness and isolation.

‘It became the location for the television series through a chance conversation in a pub in Kilfenora in 1993. Joe Mardis, the location manager for the series, has family connections in the area. While having a drink with friends from the locality they came up with the idea of setting the series in North Clare. He looked at a number of older houses, took photos and brought them back to the writers. They chose Glanquin House, and the rest is history.’

I was sitting opposite one of the famous windows when Cheryl explained about some of the shoots and how when someone needed to fall through a window, (not an infrequent event) the prop men removed the real glass, replacing it with sugar glass and then replacing the original windows afterwards. She and her family had great fun with the writer Graham Lineham, director and actors. Many locals were involved as extras, including members of the family.

The other people having tea were fans from America, Scotland, Yorkshire and West Sussex  (much more knowledgeable than me about all the minutiae of the sitcom plots and characters) and we had the chance to ask questions and also contribute our memoires of the series and favourite scenes. Cheryl very kindly offered to take photos of anyone who wanted to try on any of the face masks of the characters or pose with Mrs Doyle’s huge plate of sandwiches. Not real, of course!  There was much hilarity as a couple, one in a Ted mask, the other wearing a fake bishop’s mitre on his head, posed in memory of the moment when Father Ted kicked Bishop Brennan up the backside.

It’s wonderful how humour brings us together and how much pleasure such a series can give so many people around the world. It’s a wonderfully clever sitcom – great dialogue, complex plotting, laugh out loud jokes and slapstick as well as deeper stuff.

There’s no doubt that writers Graham Lineham and Arthur Mathews make fun of the Catholic Church and its hierarchy and it’s full of absurd and outrageous things happening. But they display a deep understanding of human nature with all its incongruities and frailties. And I believe we see ourselves reflected, at times, in the comings and goings in Craggy Island Parochial House. 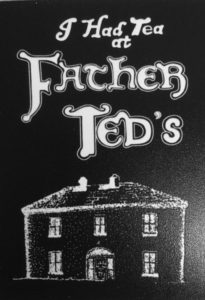