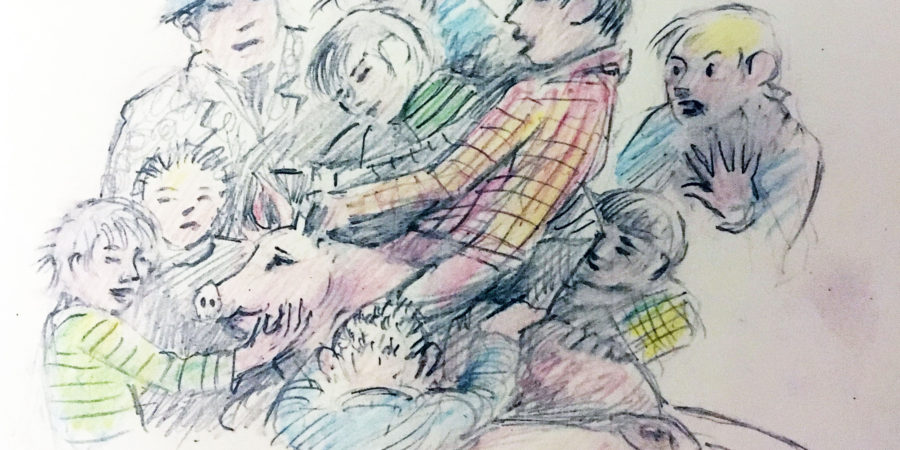 I am busy preparing my first self-published book.  Even though it’s a modest production, it still takes time and effort to make sure every aspect of the printing and publishing side is done correctly. What weight for the paper- 180 or 190gms?  And the cover ? Is  250gms, too light? Matt or silk finish; white or ivory?  Lots of hidden things such as getting my ISBN number for the book and registering myself as the publisher, which is Dewfall-hawk Press. 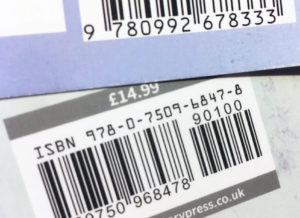 And then, of course, there will be the selling and distribution. and how to publicise the book. The writing was a piece of cake in contrast to the rest of it.

I wrote about my limerick writing in an earlier blog and I went on to develop this narrative in limerick form – Bringing Home the Bacon – the story of the theft of Wiltshire’s Bronze Pigs. I have commissioned illustrations by local artist Richard Cowdy- also connected to the story, as the sculptor of the Two Pigs. If he can’t draw a decent pig for me then I don’t know who can!

It’s solitary work writing so it’s been fun working with Richard and seeing the characters come to life in his pictures. Without his images, the book is nothing, so I’m very grateful to him.The illustrations are mainly black and white sketches with some having been coloured – as in the feature image.

I have prepared a dummy book to show the layout  of text and images so that the printers can see what the book will look like. They will receive the text and pictures digitally and then do their magic in making it into a real book. 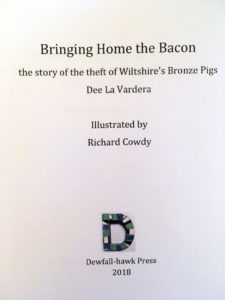 So – Bringing Home the Bacon – the story of the theft of Wiltshire’s Bronze Pigs will be available, I hope, at the beginning of September. It’s a story aimed at all ages, written in limerick form about a real event in Calne – the theft of the Bronze Pigs. Not just of interest to Wiltshire folk, it also has a universal appeal beyond the county borders. People Power Wins! – is one of the messages.

The Townsfolk of Calne were quite shaken
when Harris’s bronze pigs were taken.
On Facebook and twitter
words angry and bitter,
they wept for their heritage bacon.

The Mums who shopped down Phelps Parade
missed the spot where their toddlers played.
Kids climbed on the sculpture
Calne’s one bit of culture –
recalling its once world-class trade.

I have written to three Wiltshire celebrities for endorsement of the book and have had one reply so far.  I hope to include these on the back cover to add a bit of interest and to encourage readers/purchasers.